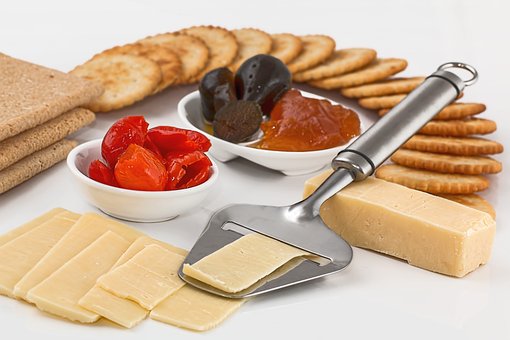 Every year a block party is coordinated and now it was our turn to be in charge of the event. This responsibility rotates from one house to the next in our little community. Our homes are stretched along a lake and the block party involves 12 houses. The host family is supposed to look after the food and beverages. This year it was determined that finger foods were to be served in the block party. I discovered this idea appealing as by serving finger foods the host family could prepare all the food beforehand and would be able to enjoy this annual block party visiting with our neighbors.

I discovered quite many recipes for salty and sweet finger foods in my recipe books. As our annual block party begins at 3pm and end at about 7pm we had to offer food that was substantial enough to be considered a meal. Many kids come to our parties also, so we also had to supply foods that they would like.

My husband and I went to the supermarket a few days before the party and purchased all the products we had according to our recipes. There were breads for sandwiches and several cold cuts and cheeses. Other products we purchased were for dips, spreads and salsas that would enrich the choice of our finger foods.

We made the sandwiches and cut them in triangles and put them on trays. As far as sweet finger foods are concerned, I baked many biscuits and bars several days before the event that I kept frozen until the day of the celebration.

We also put some lawn chairs near the lake. Some of them were set up in the sun; others were put in the deep shade, so that any of our guests would feel comfortable. Everyone fancied the idea of moving from one area to another while having a bite in the afternoon.

This proved to be a brilliant idea because there was more time to visit as there was no set meal and individuals shouldn’t be gathered at the exact same time. The finger foods turned out to be a big hit and several guests said they would also serve finger foods when they host the annual block party.

After the celebration was over the cleaning up was quite simple and fast. The food which was left was very little and simple to be stored. I believe my husband and I started a new tradition which will be continued on our annual block parties.